The Link Between Too Little Sleep in Middle Age and Dementia 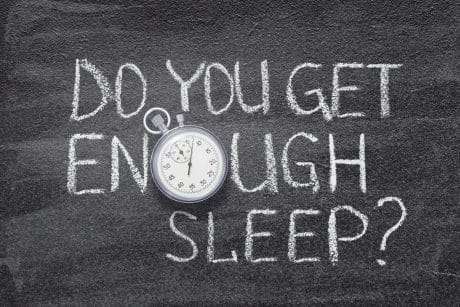 Did you know that the right amount of uninterrupted sleep helps protect the body and mind from illness and disease? It also plays an important role in concentration, learning, memory, mood and overall health. In fact, getting enough sleep gives your body and mind the time it needs to heal and recharge, so you wake up each day feeling refreshed.

According to Sleep Foundation, the leading source for evidence-based, medically reviewed sleep health information, these are the optimal sleep times for adults:

For years, researchers have wondered how sleep duration relates to age-related cognitive decline. Could the amount of sleep you get in your 50s and 60s affect your cognitive health in your 70s and beyond?

Sleep duration and dementia: The facts

A recent study, suggests people who regularly sleep six hours or less a night in middle age have a 30% higher risk of dementia as they grow older. Using data from 7,959 people in Britain over a 25-year period (beginning at age 50), this study found that those who consistently reported sleeping 6 hours or less had a higher rate of dementia at age 75 than those who reported sleeping 7 hours.

Pre-dementia brain changes, like accumulation of the proteins associated with Alzheimer’s disease, are known to begin 15-20 years before people begin to exhibit memory and thinking problems. Sleep patterns within that time frame could be considered an emerging effect of the disease.

To make the study even more interesting, the research team was able to adjust their findings for several behaviors and characteristics that might influence sleep patterns or dementia risk like smoking, alcohol consumption, physical activity, body mass index, diet, education level, marital status and conditions like hypertension, diabetes and cardiovascular disease.

“While we cannot confirm that not sleeping enough actually increases the risk of dementia, there are plenty of reasons why a good night’s sleep might be good for brain health,” says Dr. Séverine Sabia of Inserm and University College London, who led the study.

It’s important to get enough sleep, but it’s important to remember that not all sleep is equal. People sleep in a series of repeating stages, and they all play an important role in your overall health. The stages are transition to sleep, light sleep, deep sleep, and REM sleep. If you’d like to learn how to lower your stress and improve the quality of your sleep stages, Jason Ferine Physical Therapy can help. We’re a boutique physical therapy practice and fitness studio that’s dedicated to your overall health and wellness. Call 424-365-2083 to schedule an appointment today.